What are the classifications of vacuum ion coating machines

In vacuum coating machine is widely used in life, because it is non-polluting, has the advantages of fast deposition speed, high ionization rate, large ion energy, simple equipment operation, low cost, etc., so it is loved by many businesses, then its vacuum What is the principle of ion coating of the coating machine? Let me introduce to you in detail:
Films are prepared in a vacuum, including plating crystalline metal, semiconductor, insulator, and other elemental or compound films. Although chemical vapor deposition also uses vacuum methods such as reduced pressure, low pressure, or plasma, vacuum coating generally refers to the deposition of thin films by physical methods. There are three forms of vacuum coating, namely evaporation coating, sputtering coating, and ion coating.
Ion plating is the use of gas discharge or partial ionization of evaporated substances in a vacuum chamber, and at the same time as the bombardment of gas ions or particles of evaporated substances, the evaporated substances or reactants are deposited on the substrate. Ion plating organically combines the phenomenon of glow discharge, plasma technology, and vacuum evaporation, which not only significantly improves the film quality, but also expands the application range of thin films. Its advantages are strong film adhesion, good diffraction, and a wide range of film materials. There are many types of ion coating, and the healing methods of evaporation sources include resistance heating, electron beam heating, plasma electron beam heating, high-frequency induction heating, etc.
However, multi-arc ion plating is very different from general ion plating. Multi-arc ion plating uses arc discharge instead of the glow discharge of traditional ion plating for deposition. Simply put, the principle of multi-arc ion plating is to use the cathode target as the evaporation source, and through the arc discharge between the target and the anode casing, the target material is evaporated, thereby forming a plasma in the space and depositing the substrate. 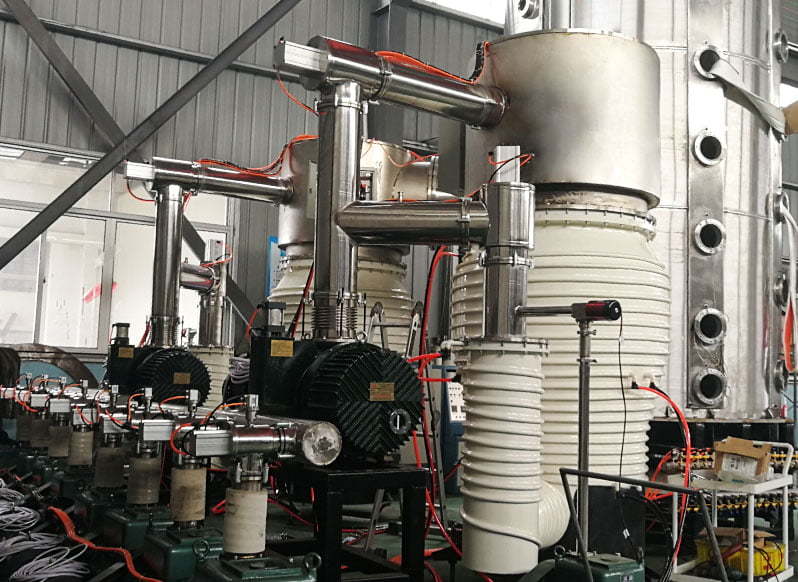